Missing the Rose Bowl in Rajasthan

The only question on my father’s mind as he climbed up the cobbled steps to the 14th Century Hill Fort Keseroli in Alwar, Rajasthan was where could he watch -- or at least get the score of -- the Rose Bowl football game being played that day in the United States. Ever since his plane had touched down in New Delhi, he had been asking about the viability of watching his beloved University of Wisconsin Badgers on television or online. He asked flight attendants, sales clerks, my brother’s co-workers, boys in the street, and a blind fruit seller. Either they didn’t know the answer or they told him, as his children had repeatedly, that during the game he would be spending the night in a 14th Century fort and chances were very slim that there would be WiFi.  When my father doesn’t get the answer he wants he doesn’t sulk or curse before accepting the facts like most adults do, he simply looks blankly at the bearer of bad news, shrugs, turns to someone else, and asks them the very same question. He firmly believes that if he can find one person who has the right answer, the cosmos will reverse itself.
The Hill Fort was managed by a company called Neemrana, which has converted several Indian landmarks into hotels.  Each room was completely different, combining old world charm with modern touches.
“Do you think that Du’s mind is going?” Erik whispered to me as we watched my father ask a bellhop where he could watch the game. It was clear that the bellhop didn’t understand English because his answer was to point to a space heater.
“No,” I whispered back, “he just hasn’t gotten the answer he wants yet.”
“Are you sure he hasn’t forgotten that he asked forty people the same question yesterday?”
“Totally sure.”
My mother looked out of the window at the endless fields of mustard surrounding the fort, “Du, even if you could see the game, this is the last night of our road trip.  Don’t we want to spend it sitting around a fire with your children in a gorgeous old fort? There are some Rajasthani dancers performing at nine.”
Du sat on the bed to take off his shoes, “Maybe one of the dancers will have a newspaper.”
My brother and I backed out of the room and rejoined our own families. Murphy was thrilled with his bed that hung from the ceiling and wanted to sleep in it right away. But the fun of pretending to be knights in a castle with his brother proved too tempting and they both ran out of the room, down the steps, and into the courtyard where we could hear them prepare for battle. Pat and I retired to the private balcony to read and look out at the scenery.  Within moments, however, Keir appeared with news, “Hey guys.  I got online in the office and looked up the game.  It’s already over and the Badgers lost.  Should we tell Du?”
Pat and I looked at each other then back at Keir.
“Don’t tell him,” I said.
“He’ll get depressed and go straight to bed,” said Pat.
“Let’s tell him in the morning,” I said.
“And admit that we withheld information from him?” Keir asked.
“Absolutely not,” I said. “Admit nothing. Say that you just found out.  He’ll be too despondent to grill you about details.”
Later, as the sun set and our families gathered to watch the dancing before dinner, Erik whispered to me, “Are we telling Du?”
“Keir told you?” I whispered back through a tight smile. Du was sitting to our left, asking a waiter where he could get an English language newspaper. I heard the waiter answer, “New Delhi.”
Erik leaned closer to me, “Yeah, Keir asked what we should do.  I was thinking that maybe we tell him right before he goes to bed tonight. That way, he’s going to sleep anyway.”
“But then he’ll know that we were withholding the information during dinner.  Let’s do it in the morning.  We tell him we woke up and found the Internet.”
“Found it?” Erik whispered.
“Whatever.  We can hone the story later. But the timing of telling him in the morning is more plausible.  Then he can sleep off his depression in the car all the way back to Delhi.”
Erik looked at the dancers setting up their instruments in the glow of the campfire and thought for a moment before turning back to me, “OK.  That sounds like a plan. I’ll tell Mom.” He stood up and I watched him walk over to my mother and whisper in her ear.  When he finished, Mom eyed me and gave a slight nod like a Mafioso authorizing a hit.
The Rajasthani folk singing and dancing was so entertaining that my father seemed quite distracted from what had been his singular quest to find out the Rose Bowl score. And throughout dinner the adult kids kept up a flow of storytelling that swept Du along with it. When it came time for bed, we all retired feeling good about having withheld the bitter truth from our patriarch for our family’s last night together in India.

What I saw at the Keoladeo National Bird Park 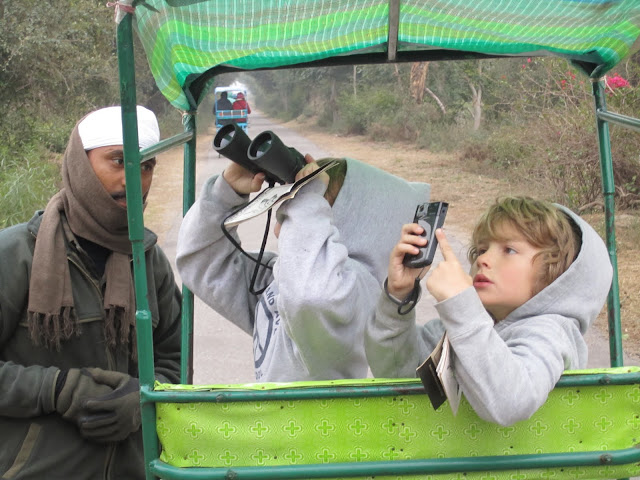 Akbar and Me at Fatehpur Sikri

Walking around the abandoned city of Fatehpur Sikri made me feel like a girl. When I was younger, I lived in England and when my family visited castles I would lag behind my parents, daydreaming about being a princess who lived there.  The daydreams had an erotic tinge, though I wouldn’t have been able to identify that then.  Twelve and cursed with unusually thick glasses, I wasn’t creating a whole lot of heat in sixth grade. Correction:  No heat.  OK, I was creating negative heat. But when I walked around the ruins of castles, I could freely imagine being beautiful and desired rather than being voted “Mrs. Strange” by my classmates, a dubious distinction that I’ve never shaken amongst old friends.
Fatehpur Sikri inspired in me many of the same romantic imaginings because it’s so intact. Built in the 1570s, it was occupied for only fifteen years by the court of Akbar the Great.  I could easily imagine myself in billowing mogul pants, breasts spilling out of my tight bustier, catching the eye of Akbar across the sun baked courtyard.
He would smile and incline his head toward one of the palaces available for a late afternoon tryst.  But I wouldn’t be that easy. I wasn’t like one of his mousey wives and concubines to be had for a mere trinket or a promise of social favors for my family. I was independent, an equal, and hotter than the sandstone walls of the Diwan-e-Khas. My name was Mona and I was a dancer. My signature move was a flawless backbend with one leg lifted, toe pointed to the heavens – leaving nothing to the imagination especially when I danced naked -- which I would only do if I liked you.
“Mommy, Daddy says to tell you we’re all on that other side of the gate,” said a high voice, interrupting my thoughts.
I looked down to see Murphy, “Huh?”
“We’re all on the other side of that gate. Daddy was worried about you.”
“Oh, honey. Tell him I’m fine.”
Murphy stood his ground, “Are you coming?”
“In a minute.”
“What are you doing?”
“Thinking honey. Just thinking. Run and tell Daddy I’ll be there in a minute.”
Murphy shrugged, “Uncle Keir says to hurry up.  He doesn’t want to drive in the dark.”
“All right. Give me a minute.”
Murphy scurried off.
OK. I’m not a dancer I’m a slave girl.  I’ve come to draw water from the well in the middle of the courtyard.  I lean over and feel a hand brush my ass through the thin silk of my pants. I’d know that hand anywhere. It’s the hand of Akbar the great.  I tremble as his hand lingers.  What if one of his wives sees us?  I might be forced to dance naked in front of the whole city. I stand, my water vessel sloshing water because I am still shaking. Akbar asks me who is my master, for he would like to buy me. I cannot look him in the eye. I look down and see that he is...
“MOMMY!!!” I turn around to see Spencer standing at the gate. “Are you coming?!”
“Yes. Yes. I’m coming.  I’ll be right there.”
Spencer disappeared beyond the gate. I started to walk toward it, slowly.
I’m not a slave girl. I’m the newest, youngest, and prettiest wife of Akbar, who has been summoned to meet him just beyond this gate. He frightens me with his gruff manor and large hands.  But I must obey the summons or he will force me to dance naked in front of the whole city. Once I step through this gate, I am completely his. Subject to his every whim -- powerless to resist his large hands and …
I walked through the gate and saw my family waiting for me in a clump.  Pat turned and walked toward me, “There you are. What were you doing?”
“Just imagining what it must have been like,” I said.
“I know,” he said, smiling.  “It must have been pretty wild.”
-- Oh my love.  You have no idea. 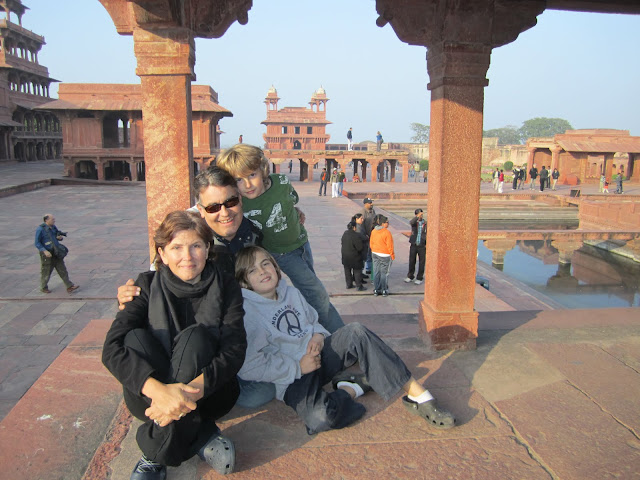 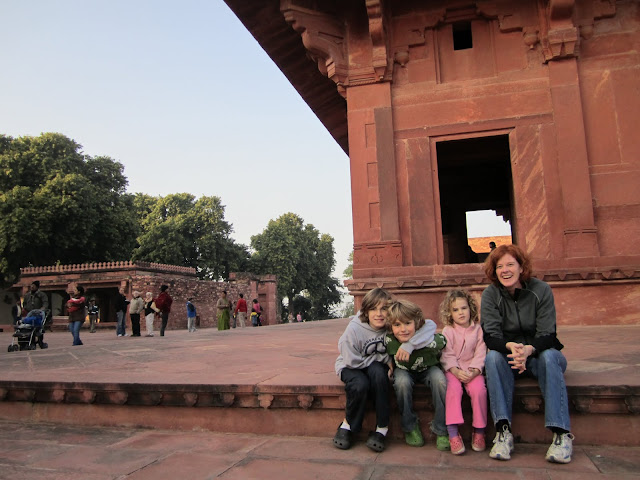 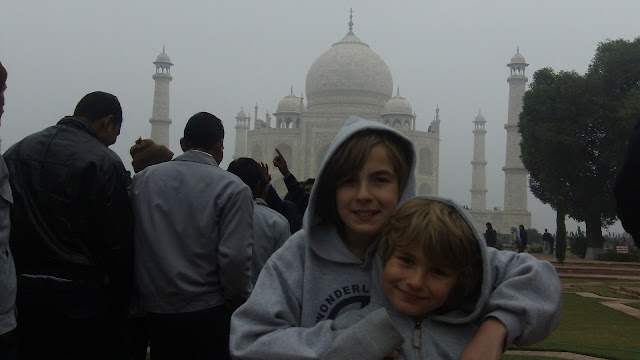 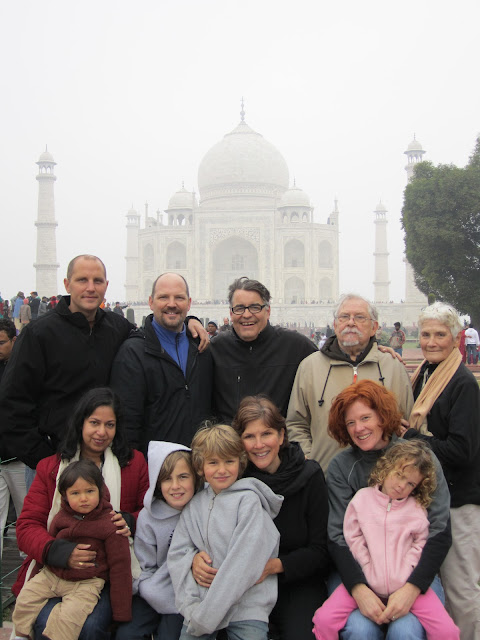