How We Roll in India 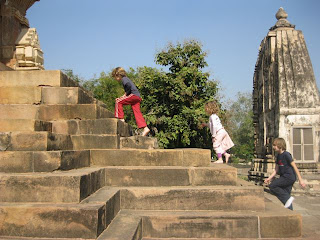 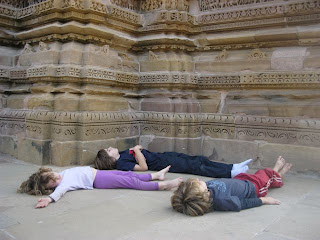 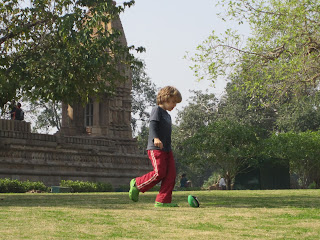 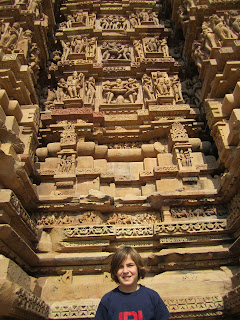 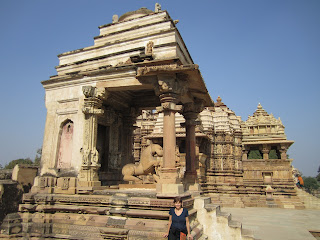 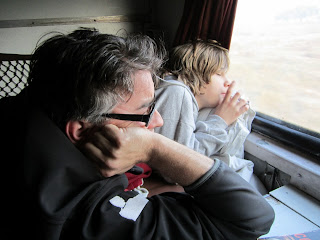 Email ThisBlogThis!Share to TwitterShare to FacebookShare to Pinterest
Posted by Brett at 1:15 AM No comments:

During the sixteen-hour flight to Hong Kong, I for slept three, watched movies for six, knitted a scarf, and read my Vanity Fair magazine.  I insisted on carrying on Jonathan Franzen’s new novel in hardback, but didn’t crack it (which could have been predicted given my lack of success, ever, in reading anything serious on a plane).  The boys also slept for about three hours, the rest of the time they played many of the 104 games offered on the individual television sets.  Pat managed to sleep quite a few hours, which is not surprising.  He sleeps so soundly, he’d miss the apocalypse if it came in the middle of the night.
By the time we got to Hong Kong, we were coming down from a television buzz and completely ragged. But we were determined to see something of the city in our fifteen-hour layover.  My style in these situations is to ask the information desk lady for the easiest way to the biggest site in the shortest amount of time.  Then I simply write down what she says and follow her directions. If I get lost, I simply take the directions over to a kindly looking indigenous couple and ask them to set me straight. If they don’t understand English, I point to the directions and madly gesticulate and/or cry until they understand or get frustrated and guide me over to someone else who does. This is an infallible system that has gotten me through all of Europe and the Middle East.  This is not, however, a system that works for Pat. He does not trust the information lady’s information and must consult many maps.  He must jot down lists of possibilities and mull the transportation options until I’m senseless – let’s get on the goddamn bus already.
By the time we walked out of the Hong Kong airport this morning, I was sure I didn’t love him anymore.
When we finally hit the harbor, I had decided to stay with him for the sake of the children, and we actually started to enjoy ourselves by simply communicating with the boys and not each other. It was a drizzly day, but we all felt flush with the accomplishment of actually having made it half the way around the world.  I have to say the boys were total troupers, trying the local food (which admittedly one can get in Los Angeles, but they wouldn’t have eaten there because it was too spicy/weird/smelly).  At a restaurant we picked at random, they clacked the chopsticks around, tried everything, and even decided that some of it was good.  I’m not sure if this was genuine.  They may have simply been trying to save the marriage. Earlier, when we boarded the bus into town, Spencer had impugned, “Can you please stop arguing?”
We then explored the walk along the harbor.  The opposite shore was lined with many skyscrapers and Pat and I had a fairly polite conversation about how much the city reminded us most of New York.  We hit a stretch of boardwalk that appeared to be the Chinese walk of fame, featuring stars in the sidewalk and several statues with Hollywood themes.  It occurred to me about our trip, lives, and marriage – wherever you go, you end up home.  I’m sure that I’m stealing the sentiment, but I can’t remember the source.  The central large bronze on the boardwalk, was of a towering Bruce Lee.  The children didn’t know who he was and Pat and I had a bonding moment while giving the children a brief overview of Lee.
Pat had located a prominent park with his fifty maps and guided us there surprisingly easily.  We saw some unusually colored ducks and a passel (flock? Herd?) of flamingos.  Spencer spied a couple of downy brown birds that he had never seen before.  He keeps a bird journal from time to time.
In the same park, we also found the Hong Kong Orchid trees.  We surmised that this orchid might be the same one emblazoned on the flag of Hong Kong.  But because I let research languish, we may never know.
The main event, however, was a maze made out of shoulder-high bushes.  We broke up into two teams to see who could make it through the fastest.  Pat and Spencer won. But for obvious reasons (Pat’s height and Murphy’s lack of height), I think they had the stacked deck.  Pat was actually darling, darting in and out of the bushes. It’s possible that I might recover some of my former feeling for him.
As I write this, all of my men are sacked out on benches back at the airport.  I awoke from my own nap minutes ago. We’re only a few hours into a trip that will get far more adventurous in the coming days.  But I am encouraged that Spencer and Murphy seem to be accepting the discomfort of traveling and embracing the adventure.
Perhaps they’ve been simply too weak to protest.
Posted by Brett at 9:13 PM 6 comments:

Off to India Today -- a cliffhanger

A couple of evenings ago, Spencer asked me to proofread a story he was writing for class.  For a parent who is a writer, this is tantamount to a baseball player’s son asking him to have a catch.  I had to squeeze my eyes shut to stop the tears from trickling down my cheeks and stifle the urge to envelope him in a suffocating embrace while mewing, “Yes, my boy. I will be your inspiration.”
Pulling it together, I reviewed his piece, which was nothing short of a fifth grade masterpiece. I did, however, have one quibble.  Why, I asked him, did he interrupt the conversation in a scene with a break filled with a line of asterisks, only to pick up at the next line of dialogue?
“It’s a cliffhanger, Mom,” he said, his voice dripping with the annoyance of having to state the obvious.
“Ah, yes.  I see,” I said. I decided against pointing out that he had artificially created the cliffhanger. After all, maybe he’ll write for Hollywood and the skill will come in handy.
Taking a cue from my son, here’s my cliffhanger:
We are leaving for India tonight at midnight.  So far, what has generated the most excitement about the trip for the children is the fifteen-hour flight to Hong Kong.  Normally, I ‘m not liberal with television and the computer, but on the flight they will each have their own television and gaming system.  Their excitement over uncontested screen time is that of drowning men seeing a distant shore.
Backpacking and traveling on a shoestring holds surprises in any country, India being no exception.  Keir and Robyn have told us to bring clean sheets since some of the budget hotels might not have clean ones.  It is possible that in some places, we will be bathing out of buckets.  I have always found this kind of traveling exciting. It requires one to be present, adaptable, and I tend to find that I get a feel for a country and its people beyond what I see in the splashy pages of any tourist brochure.  But it will all be new for the children.  Will the boys who can barely contain their excitement about private televisions on the plane be as adaptable and appreciative as I hope?
What are my finicky eaters going to eat?
Will the experience of watching families cremate their loved ones on the Ghats of the Ganges be spiritually memorable for the boys – or will it generate years of freaky dreams they cannot shake?
What are they going to eat?
Will my broken toe continue to be an infuriating and painful impediment or will my travels through a multi-layered culture give it context in a “blessings of a skinned knee” kind of way?  Here’s hoping.
Will Pat be able to let go of adding up how much this is all costing us?
Friends who have been to India tell us that there’s no place like it on earth.  The food is spectacular, the colors are intense, the people generous, the architecture and the arts stunning, and the poverty overwhelming. With a booming national economy, I understand that there is also great wealth and technological advancement.  This is all second hand, of course.  Now we will get to see it for ourselves.
Our bags are jammed full of presents for our family and Santa’s bounty is flying with us. In our usual disorganized manner, we have attempted to anticipate much of what we will need. We are bringing antibiotics even though Keir wrote us that they are “for sissies.” It is a moniker I can’t entirely refute.
Am I hoping for a spiritual reboot?  Of course. I’m sure that being amongst a people that are well known to focus on spiritual practice and philosophy cannot help but inspire me.  But I have always found travel, and simply jiggling oneself out of the everyday, brings a wealth of insights that are overlooked otherwise.  In this particular case, however – given the crappy year and the extent of our travels – the jiggle is more of a seismic shift.
Back to the cliffhanger.
When I was growing up, my mother took me to generally protestant churches on military bases throughout Germany and England. My mother could not be described as a classic Christian, having pronounced very early that she wasn’t that interested in going to heaven if none of her friends would be there. She did, however, want us to have religious and spiritual grounding. She told me that she didn’t care what I ultimately believed, but she did think hope that I believed in something. “When you are hanging off of a cliff," she said, "I want you to believe in something that helps you hang on.”
I have spent many years in pursuit of a God or a philosophy or a spiritual practice that will keep me hanging on.  This endeavor has met with moderate success. I am a seeker who has managed to hang on.
Today, the day of my departure, I am thinking of my trip to India with the people that I love.  We have barely any money, few job prospects when we return, no savings, and no plans. As I hang off of that cliff, it occurs to me that instead of hanging on, I should let go.
Next stop: Hong Kong for a fifteen-hour layover.